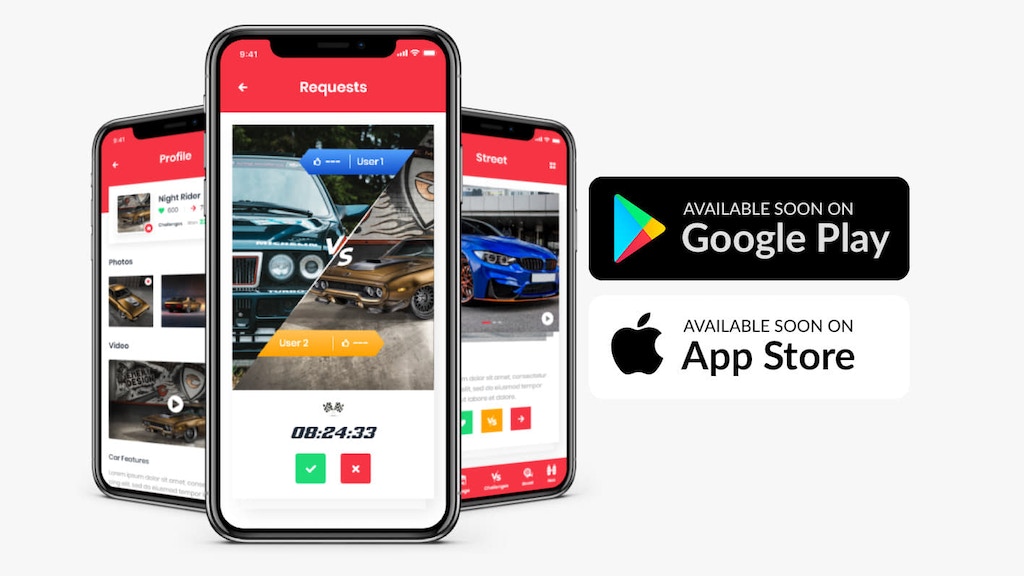 Your car, that’s you!

Register with your car, show it to the world and win battles against other cars online.

Is you car special?

This is a MUST for you

Stop liking car pictures on social media. Here, everything revolves around YOUR car. Upload photos & video of your ride and show it to all the other car freaks out there – and we go globally! Get inspiration from other vehicles and park your favorites in your personal garage.

Listen to the concept behind CAR FREAKS:

This app is different!

It is not only unique, but also the first of its kind. There is currently no app where lovers of beautiful cars can meet exclusively.

Not here! On this app, YOUR car is the star and thousands of people can see it. It is finally getting the attention it deserves! Use this app also to promote your own IG account!

Surely this will be the most used feature: Challenge any other vehicle, no matter what brand or type. The community determines the winner. In the end, the winner gets the loser’s votes credited as likes on his profile. So choose your opponents wisely, win challenges with the support of your friends and go to the top for fame and honor – and great prizes!

Every car you like will be parked virtually in your app garage. There you can view them over and over, show them to your friends and with time, this garage will reflect your personal dream, selected by you. Remember: You can challenge all cars in your garage – anytime.

With the QR code in your profile (Driver profile) or the elegant golden sticker for your car (Enthusiast profile), other people can find your profile directly without endlessly swiping. Every person scanning your QR code/sticker will end up directly on your car profile without swiping, and in addition you will automatically receive 5 likes. So you have a mini website for your car to link, show, collect likes, or – maybe you might want to sell your car later with a heavy heart.

Imagine you drive a 1995 GMC Yukon, and your neighbor has this elegant QR sticker on his 2020 Lambo – 1 scan and 2 clicks, and the community will vote for the best.

Important: This app is free for everyone! Everyone can create a profile, share it with their friends and take part in an unlimited number of challenges. We deliberately refrain from annoying advertising, as we know it from games or dating apps. For most users, the driver profile is completely sufficient.

But: there are certain paid features to be purchased one-time or by subscription. For example the “Boost” or the “NOS” Feature, which may help you to gain the little advantage needed in a challenge or for your likes. But no worries, we thought it trough: With the cool-down timer and refill timer not even the hardest power user can take it out of level. No engine blow-ups will be risked here – fair game.

The next level: “Enthusiast”

You need more? We know that feeling. With an upgrade to the Enthusiast profile, you are free to use all those features.

But not only this. As an Enthusiast, you will get the exclusive QR sticker for your car, plus the exclusive dark mode is available to you, and you will love it!

You are a car dealer, tuning garage or parts distributor? You will be pleased to note, that also commercial profiles are in our pipeline. Once the community is ready, professional suppliers of cars, products and services will also get their money’s worth at attractive conditions:

But why Commercial Profiles later?

Community first. We don’t want our user being bombed by advertising. Nothing on the App would be more frustrating than getting ads all the time. Well, maybe losing a challenge by 2 votes is worse. But still we want to start it, when the community has grown. This is more attractive for the businesses too, by the way. We expect 350’000 users before starting commercial profiles. Choose the right pledge now – and profit later with your business.

Since I can think, my world has revolved around cars. Already in my youth I could guess car brands with closed eyes only from the sound they made. My enthusiasm brought me to motorsports and in 2017 I was awarded the title “Swiss Car Driver of the Year”. Since then, the idea of a cross-brand platform grew in me, where like-minded car freaks from all over the world could present their individualized car and compare it with others. I have spent a lot of time on online forums and social media, and I understand the need for likes, for inspiration, for recognition. Bringing fans of all brands and types together on the CAR FREAKS App is ambitious, but with small contributions from many enthusiastic people it becomes a privilege. I hope you are part of it and thank you for your support and trust!

Guys, sometimes your rides sound really good, but when you turn your rounds, let us women look at it for a few seconds longer. Drive a bit more moderately or even better, create a profile at CAR FREAKS! And YES we can, while the hairdresser styles us, we are swiping through your profiles. Save us from the grubby magazines and show us your enthusiasm. As a representative for us women, I feel obliged to ensure that the female needs are also strongly represented in this app. Gripped by the vision of the founder and as a lover of masculine cars, I am enthusiastically on board with the development of this app. Thank you for your support and your belief in us and in this community!

Why secret? Maybe famous? Camera-shy? Or simply too pretty? I assure you; I am complete car maniac, too. And even though we three freaks are drifting apart in our preferences regarding car makes or design, we have a clear common vision, which I am convinced of from the first time I heard about it: A community. Together we will create something new, fill the long-time gap in this segment and finally have fun again when we swipe. 🙂 A big thank you to every single supporter.

Yes you saw it there, we know. There is a sale button coming up. Add it to your normal profile, make a price tag and everyone swiping gets your contact details with the push of the button. Now imagine this combined with the QR sticker – driving around with a car rear window advertising is gone. But you want it now, why do we bring it later? Because we don’t want this app to be a market place only. First, we build the community. Then, everyone using the app can have a sale button, and surely you can get a lot of money for a positive win-lose ratio on your challenges 🙂

By the way: We don’t take commissions. Never.

Events – One calendar for all

Last but not least, an event calendar for all brands and types is planned. Gone are the endless searches in all forums for the right meeting. This calendar is filled by the community and shows all meetings and events, regardless of the brand or how big / small the event is.

First of all: For 2 decades now, I’ve been waiting for an app like this. I saw ideas and attempts of different peoples and brands, but it was never more than a business idea to get user data and reach. We take a different approach, and we bring it even further. This is not simply an idea anymore – we brought it down. There is a full concept, we did a lot of research, and went trough the challenge to find the right development partners who walk the talk. Quality has a price though, and this is ours.

Secondly, of course, there are other ways to make it happen, sure:

This app is owned by the community, so we don’t want investors to rule the thing. We keep the rights and host your content safely. Nobody gets your data! This is important to us and should be to you too. We want to offer a free-for-anyone platform, where a infrequent user with a low price car in in the same community and on the same app as a collector or professional who want to spend their time here.

And finally: Don’t forget that this app makes so much more fun if its globally and not only national. For this we need to roll out in all countries, working with partners to promote it locally, and pay the app stores accordingly. Believe me when I tell you that you will want to challenge cars from my country!

Therefore we go the way of crowdfunding, and we need the support of everyone who wants to see this flying. As a collective for a good cause. All for all, so to speak.

Support us now with a donation, or choose your pledge and be a future member as soon as we lift off!