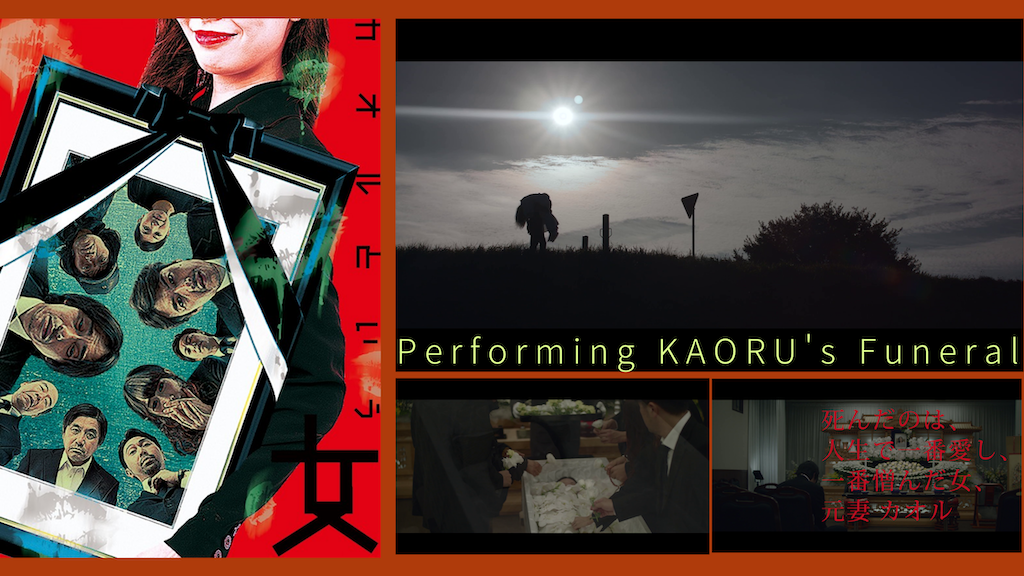 “A tragic and comical story of one woman’s final days, mixed with irony and love”

*Please note that this movie is a promotion video, so the cast and contents are different from the latest screenplay.

Set in a Japanese funeral, this work by widely acclaimed director will bring Japanese film to a level of artwork with its beautifully controlled color tones.

One woman passed away, Her name is KAORU. She left a note telling that she would like her ex-husband to act as the chief mourner at her funeral. For her, the funeral is a yell for her bereaved family members.

By carrying out the funeral together, her ex-husband Jun and her only daughter Kaoru will be able to take one step forward in their lives. Life is unequal. But death comes equally to everyone. Human beings can never know what will happen in the future but never give their hopes up either. Life is a never-ending struggle.

KAORU Washizu, an infamously greedy screen writer, dies suddenly in a traffic accident. While some seek reconciliation and others revenge at the moment of their death, KAORU takes the opportunity to bind her impoverished ex-husband (Jun Yokotani) in an obligation of mourning and meticulous respect. 10 years after their divorce, Jun is startled by KAORU’s last demand, but travels far in confusion to Okayama to host her funeral as chief mourner. An actor (self-proclaimed) who usually work as an escort agency driver who sends a sexually-serviced woman to a guest’s home or hotel, Jun cannot refuse either the request of his past love nor a vast promised fortune if he performs KAORU’s Funeral to the letter of her Will.

Lonely but not alone, Jun is accompanied by KAORU’s co-workers. They too will help see the preparations to KAORU’s Will, without love but only bitterness for their greedy colleague. Rumors and gossip emerge that KAORU’s end was no accident, recalling memories of harassment and threats. “I would have killed her, if I was never punished for doing so” said.

Jun also meets with KAORU’s daughter, Kaoru who looks just like mother : KAORU only in younger form. As cute and beautiful and hateful as her mother, Kaoru coldly tells Jun at first sight, “Funeral was the last wish of my mother. You have to hold the service as  the chief mourner of KAORU’s funeral perfectly, not missing a thing from her will. Your only reason for being here is to do so.”

Although JUN had completely removed Kaoru’s existence and marriage with her from his life, the greatest moment comes. During the time before Kaoru’s funeral, the “fragrance of Kaoru” reminded him of his memory with KAORU. The “fragrance” connects his memory and emotions through the traditional Japanese “Kodo” (traditional incense-smelling ceremony). His isolation increasing, Jun remembers only his marriage with KAORU, a woman full of honest emotions, who cried, laughed and grew excited at simple things. KAORU’s death no longer separated him only from her, but from all that he thought he knew in her world.

Simultaneously dumb, adorable, ugly and beautiful, the characters of Performing KAORU’s Funeral bring viewers through a sarcastic veneer deep into the heart and obligations of family.

Aiming to start shooting in January 2021 and to complete it in early May 2021 as scheduled, we set the first goal of crowdfunding to get the necessary funding that covers the pre-production fees listed below.

The aim of this crowdfunding is not only to gain as much support as possible, but also to reach the widest possible audience in the world. The amount of funding that will be raised here has a direct impact on our project in terms of quality, project sustainability and passion and motivation of the staffs.

However, it all starts with you!

I won the Grand Prix at the “MPA / DHU / TIFFCOM Pitching Contest” held in 2018 and participated in the American Film Market held in Los Angeles, USA in 2019. The big encounter I got from there started the concrete movement of this project. From the spring of 2020 to the present, the violence of COVID-19 has hit the world. Due to this unprecedented situation, people all over the world are definitely raising their feelings about “life” and “death”.

Although “Performing KAORU’s Funeral” started from my personal experience “farewell with my dear friend”, I am sure it will definitely be meaningful to disseminate this film about the domestic phenomenon of “funerals” in Japan widely to the world in the spring of 2021(the time when this project is scheduled to be completed). The work dealing with the universal theme of saying a final goodbye to the departed will surely create a deep impression, resonate with the audiences, and even provide them with the important clue of life, all the more because of this unforeseen situation, where people were not even allowed to mourn for their loved ones.

In the world where video-on-demand has become exceedingly popular, we will strive to jointly create contents with a Japan-driven international team and to construct an international scheme aimed at improving value and enchantment of film and making a profit not only in Japan but also in a global market.

From now on, our team will raise funds around the world while promoting “Perforimng KAORU’s Funeral” and increase the number of supporters (peer-to-peer) who will participate in this project. The official YouTube channel *MIKANORIKO CHANNEL newly opened, will show the world distribution map. We would like to actively connect with peer-to-peer colleagues.

We hope to connect with new friends regardless of nationality!

MONEY RAISED WILL BE USED FOR

“Performing KAORU’s Funeral” We will talk about the big picture of crowdfunding and the future plan! Even after this time of the First Phase has been completed, crowdfunding will continue followed and so on Second Phase, Third Phase….until this film is delivered.

The future of crowdfunding is scheduled to be performed for the following expenses.

We sincerely hope that many people will support our team as we climb the stairs to make our dreams come true. Thank you!

The film is based on the unique funeral culture in Japan!

We have prepared a lot of thanks for the supporters and peer-to-peer people who can support us. Also, if you participate in our kickstarter campaign every time, we will invite you to the “Completion Celebration Party” and “Interim Report Party” *Remotely!

Producer MIKACO and Director Noriko Yuasa are talking on YouTube channel about their thoughts and current situation about the filmmaking!

About “The film credits”

Add an “Executive Producer credit” on the film

​Due to the spread of the new coronavirus infection, the impact is currently progressive all over the world, and I think that many people are suffering financially. “Performing KAORU’s Funeral” was originally planned to be shot in November 2020, and everything was in progress. We think that it is a critical moment now.  Also, We are convinced that this film, which depicts the universal theme of humankind, “Say their final goodbyes” at this time, will bring sympathy and excitement to the world, and will be a major step in Japanese entertainment. Thank you for your support. If you agree with this, Please contact us directly at the email address below.

Noriko has been director in Japan for over 20 years. She directed Amazon Prime Video ;Original Drama series “NIHON WO YUKKURI HASHITTEMITAYO ~ANOKONOTAMENI NIHONISSHUU” as well as feature films, short films, and TV Drama series. Now, She is bringing the creative vision to International Film Festivals around the world with own latest production, “Coming Back Sunny”!

After learning the art of directing at a TV Drama Production Company, she decided to explore my unique creative vision independently. ☞【PROFILE】

In six short years, she created four internationally recognized short films, while continuing to produce and direct television dramas on request. Twelve(12) International Film Festivals selected “Ordinary Everyday” to feature to their audiences, reaching cinema lovers in Germany, India, Japan and the United Kingdom. Next, the award winning “Girl, Wavering” received 17 Crowns/Laurels from festivals all over the world. Latest short film “Coming Back Sunny” have already been selected some international film festival *France, Italy etc. in this year, and it will touch audiences deeply once they see it surely.

Although sometimes the language barrier can be difficult for her, she has continued to promote own films and projects created in Japan to a wider audience world-wide.

We would like to ask many people to support this crowdfunding. To be honest, the global epidemic of coronaviruses is still ongoing, so We were wondering if this crowdfunding should be done to the end. However, we believe that the success of this activity itself can encourage independent filmmakers around the world, so we decided to launch this project.

As mentioned above, this activity is not temporary. Even under difficult conditions, the team as a whole will steadily and steadily move on to the path of new movies after COVID19. We appreciate every little contribution and are grateful for your time.

Thank You to the Kickstarter community！

We are waiting for all of your support!

Have a question or a suggestion?  We would love to hear from you.

You can send message to us. ☞【CONTACT​】