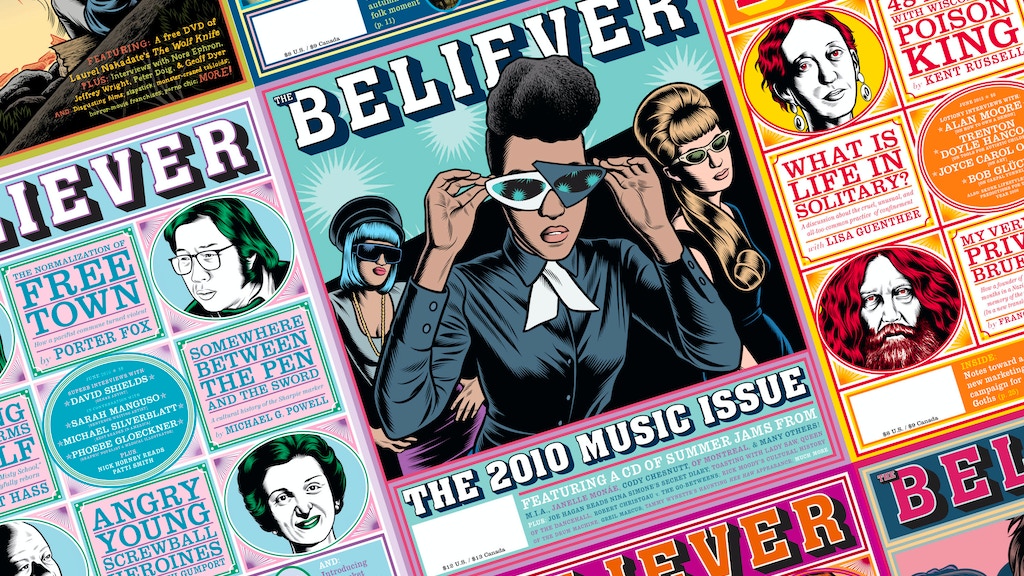 In 2003, McSweeney’s launched The Believer. Now we’re fundraising to continue publishing it and carry on its essential literary legacy.

**Special note: We put this campaign together quickly. Know that we’ll be adding more rewards, and more surprises, along the way. Please support us now to receive backer updates and early notice about all that’s to come.**

The Believer is heading home. A twelve-time finalist for National Magazine Awards, The Believer was founded in 2003 by Heidi Julavits, Ed Park, and Vendela Vida at McSweeney’s. In 2017, during a challenging time financially, we sold the magazine to the University of Las Vegas, Nevada (UNLV).  After UNLV was no longer able to publish it, McSweeney’s re-acquired The Believer, including its archive and assets, in spring 2022.

We are humbled that three individual donors came forward to pay for the purchase of the magazine, as a gift to us. Now, we’re tasked with starting over as The Believer‘s publisher, and we’re determined to make this new chapter of the magazine its most resplendent ever. Packed with intelligent commentary, unexpected interviews, offbeat journalism, poems, art, book reviews, and more, The Believer is a nexus of literary culture. Its twentieth anniversary is next year, and we can’t wait to start The Believer’s third decade with you alongside us.

We’re fundraising now to build staff and operations to get The Believer back in print. Magazines rely on a years-long pipeline of stories in progress and regular revenue from ongoing subscribers. We’ll have to hustle—and we’ll need your help—to align our resources and do this, but we’re convinced that our fervent community of writers and readers will stand behind us. We’ll begin with a four-times-per-year publishing schedule, starting with our homecoming issue set for late November 2022. Expect to see everything you’ve loved about the magazine for 19 years,  and more.

In addition to those start-up expenses, we’re hoping to raise enough to cover costs to publish the magazine for its first four issues in this new iteration. Supporting us now will allow us to build the infrastructure and subscriber base we’ll need for long term sustainability.

If you believe in this work like we do, we hope you’ll make a gift, and we know you’ll enjoy the rewards to come. Join us as a backer to Bringing The Believer Home campaign, and your funds will go toward: payments to writers, artists, and translators; staffing for customer service, design, editorial, sales and marketing; printing; shipping and distribution. At McSweeney’s we’ve been making books and magazines for almost 25 years. We know the ins and outs, the ups and downs. We know that publishing a print magazine in 2022 takes guts, money, a ton of incredibly hard work, and a beloved network of readers, writers, editors, and believers. We’re ready. And we’re so happy to be inviting you to join us in Bringing The Believer Home.