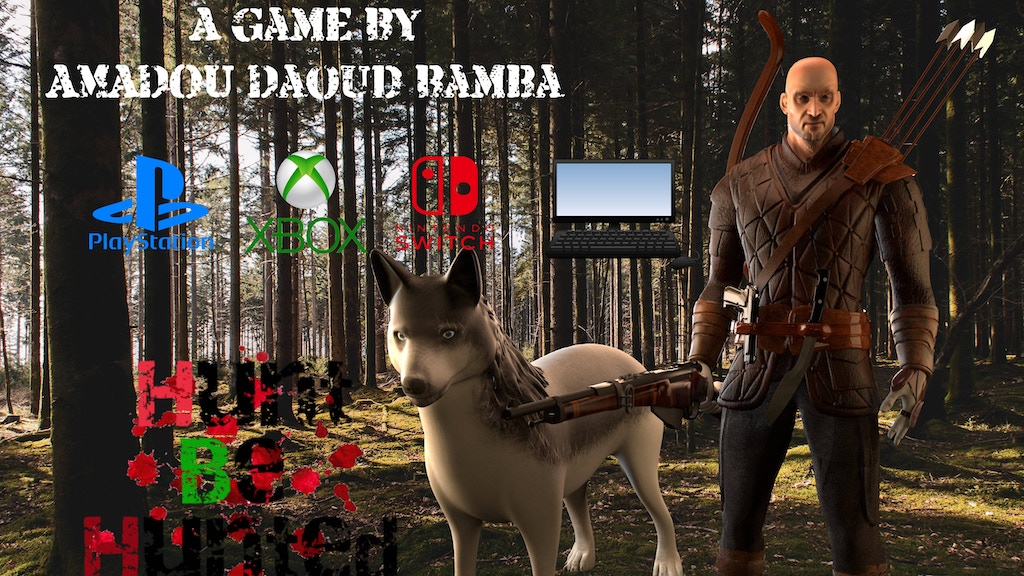 Hunt Be Hunted
Action game set in jungle
Survive in the jungle by hunting those wild animals with your hunting dog side by side.

’Hunt Be Hunted’’ is more than just a Hunting game. This open-world action game is one of the few titles in this genre in which setting is based on Real Life Jungle Locations. Players will need to survive in these dangerous, where there is no mercy and no hope of rescue, y’all alone with just you and own abilities and your hunting dog to protect you from danger. Explore the most dangerous and amazing jungles in the world while hunting with your dog, any animal kill gets you money so you can buy any type of weapon (guns, arrows, even dogs). You will be hunting with your dog in 10 amazing, dangerous and deadliest jungle in the world which are:

Everyone has a survivor side within themselves, let’s ‘’Hunt Be Hunting’’ reveals yours.

The danger of the Jungle to an average human being is well known. Creatures nobody wishes to come across like tigers, lions, snake, crocodile, rhinoceros, cobra, hyenas, hippopotamus, etc… all abound in the Jungles of the world and if you don’t kill them, they will not hesitate to kill you. This game gives you the opportunity to play as both the hunter and the prey, the more dangerous the animal you kill is, the more money you will get. In this game we’ve selected 10 of the most wonderful and dangerous jungle which are:

The Amazon rainforest, covering much of northwestern Brazil and extending into Colombia, Peru and other South American countries, is the world’s largest tropical rainforest, famed for its biodiversity.

The Sambisa Forest is a forest in Borno State, northeast Nigeria. It is in the southwestern part of Chad Basin National Park, about 60 kilometres (37 mi) southeast of Maiduguri, the capital of Borno State.

The Crooked Forest, is a grove of oddly-shaped pine trees located outside Nowe Czarnowo near the town of Gryfino, West Pomerania, Poland. This grove of 400 pines was planted in around 1930, when it was still located within the German province of Pomerania.

Tsingy de Bemaraha is located near the western coast of Madagascar in Melaky Region at 18°40′S 44°45′E.

The Black Forest is a mountainous region in southwest Germany, bordering France.

Aokigahara, also known as the Sea of Trees, is a forest on the northwestern flank of Japan’s Mount Fuji, thriving on 30 square kilometres of hardened lava laid down by the last major eruption of Mount Fuji in 864 CE.

The Hoia Forest (Romanian: Pădurea Hoia; Hungarian: Hója-erdő) is a forest situated to the west of the city of Cluj-Napoca, near the open-air section of the Ethnographic Museum of Transylvania.

The Daintree Rainforest is a region on the northeast coast of Queensland, Australia, north of Mossman and Cairns.

Jog Falls is located near Jog Village in Sagara, Karnataka which is a part of Shimoga district. Jog Falls is also known as, Joga jalapatha and Jogada gundi in the regional Kannada language.

Jiuzhaigou is a network of valleys in China’s Sichuan province. In the northern Shuzheng Valley, Nuorilang Waterfall cascades from the edge of a large tree-fringed lake.

As you can see up here every jungle has a number of animals you have to kill to unlock the next dangerous jungle, and every animal kill brings you money to your account so you can buy a new weapon or Dog to help you hunt.

We will release the game on PlayStation 4, Nintendo Switch, Xbox One and Windows and MacOS in Steam.

We have little gift for our backers

The game + T-shirt with your name on it and sign by the owner of the game.

The game + T-shirt with your name on it.

T-shirt your name on it

For those who will like different color you can see the available colors and size.

Hunt to be hunted is the brainchild of Daoud Bamba, an ardent gamer located in New York. During the coronavirus lockdown, he had the chance to play a lot of games and one of his favorites during this time was “Hunting Simulator”. However, he noticed the game had a lot of features absent which would have made the game even more awesome. Daoud decided to build his own personal game incorporating these features for a better gaming experience.

We would love this game to get as much support and attention as possible in the global gaming community. The main reason we have chosen to use KICKSTARTER as a platform is so we can amass more players. The number of supporters we get on this campaign is more important to us than the amount raised (which doesn’t mean it ceases to be important to us, all the same!). Our intention is to unite and involve as many people around the game so that we can show our commitment to the global gaming community. Apart from that, KICKSTARTER is an international platform that has been around for over a decade and has helped make thousands of game-related ideas a reality, and we see this platform as an excellent channel to communicate and disseminate our game, so we can build a passionate community. This means we do not see you as just another backer: your feedback is important and we want to hear about it! You can support by pledging and sharing the campaign on social media.

OTHER WAYS YOU CAN HELP

If you would not be able to help now, or in the future, there are other ways you can assist or contribute, you can share this project in the following ways; Message It Forward – This is when somebody sends you an important message and you “Message It Forward” by sending that message to everyone in your contact. Tell people to help spread the words about our campaign. Endorse Us – Share our campaign. Copy & Paste our campaign link above to your: Facebook, Tweet It (Twitter), Pin It (Pinterest), Picture It (Instagram), Blog It(Blogger/WordPress/Tumblr…), or Link It (Linkedin). Social Media is a key marketing technique and will be a vital factor in the fulfillment of these aspirations. If you have any questions or inquiries, don’t hesitate to get in touch! Thank you for your time reading and participating.