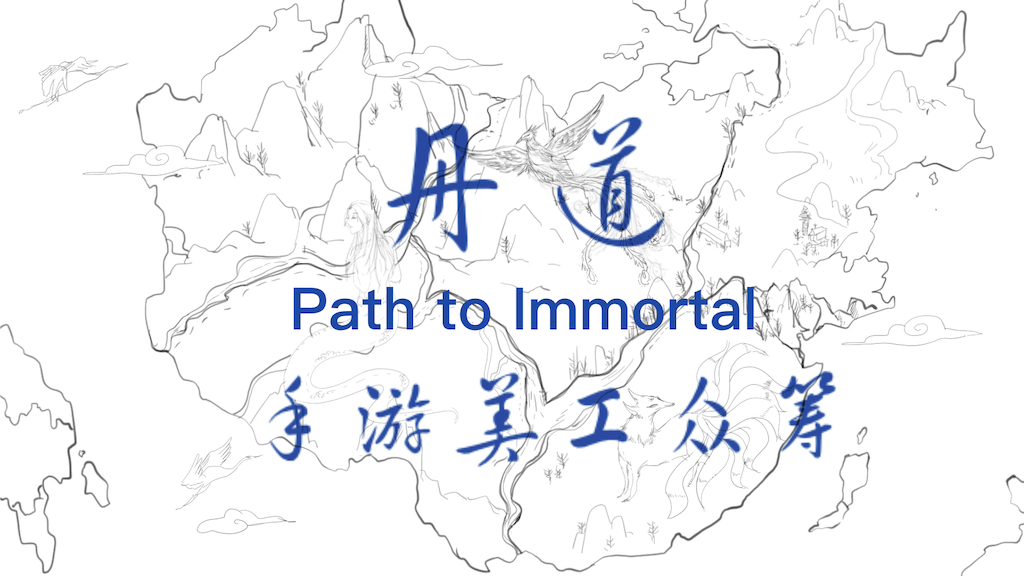 富有中国元素的手游，以山海经和炼丹为蓝本的音乐回合制手游。
A moblie game Base on Chinese myth “Shan Hai”. A game to show you how they become immortal and make Dan.

Our Story began with a teenager wrote a Chinese novel about ancient immortals.

After I got my degree of computer science in the U.S. I went to an IT company. I made games by my own when I had time. None of them makes me satisfied.

4 years ago, I decided to start a new project based on my unpublished novel, and plan to take whole life time to finish it 🙂 maybe.

Then I met another six guys has same interest with me about 3 year ago. We use our free time to build this game together.

Early this year, because of the COVID-19, We had plenty of time to work on our project. Then we realized our game is pretty much done (60%) in the most part.

As you can see we are all programmers, none of us good at art. We have tried several ways to get the Art supporting from someone else. The result wasn’t good enough.

We decided to post this game on Kickstater to get money for hiring 2 partners to help us with arts.

Buddhism is a famous eastern religion. Actually, Taoism is Chinese native religion. Buddhism was introduced into China around 67 A.D. Taoism is the creation religion.

Tao is also called Tai Chi and the Chaos. It means everything as a whole before the creation. Then it becomes to two Yi. Which also called Yin & Yang. It stand for the double sides of the universe. Sun and moon, sky and land, positive and negative, justice and injustice. This is the earliest creation.

Two Yi become to four Xiang. They are stand for S, N, E, W four positions. That’s the foundation of the world. At last, four Xiang become eight Gua. Which represents all the elements such as sky, land, thunder, fire, mountain, wet, water, and wind.

Shan Hai Jing (Mountain and Ocean Bible), is one of the famous book related to Taoism and Chinese ancient immortals story. Most interesting thing is no one could confirm it’s a novel or history or even a Chinese bible. Who knows, the end of science is theology!

We want to share our Chinese native myth universe to all over the world. Come with us to explore the ancient myth world.

1. Based on Chinese ancient book Shan Hai Jing(A book includes most Chinese myths stories.), and my novel as well.

2. Dan is the biggest part of this game. It’s a Chinese traditional alchemy. More mysterious and more complicated.

3. Not a traditional game.

1.According to our calculation, we need about 50,000 CNY which approximate $75,000 American dollars to hire 2 partners to finish the art part in the next 6 months. After that, the early demo and real phone testing video will come out.  (Around July 2021.)

2.Then We need another 4 months to test and finish the game. When it ready, we will test the game on Android system first and randomly invite 100 players to join the test.

3.We hope get all the feedback before 2022 Spring Festival.

4.Totally, after 12-16 months. Around 2022 Summer. We will start the first Alpha test on both Android and IOS system. (IOS may little bit late than Android because of the Apple’s regulations.)

Q: Is this graphic would be the same we see in the game?

A: I would say it won’t be. As you can see those are only scratches and simple drawing. We are really bad at art, we tried to show how game is. We asked my friend  to draw the pictures who is also not a professinal artist but better than as.

A: We are thinking about buying a better server and maybe pay part of money to create our own game musics.

Q:Alpha test pass is only work in alpha test?

A:No, once you get the pass, it works on all the alpha tests and beta test.

Q:Is this game’s language only in Chinese?

A:No, we had great translation in English, but for other languages. I am sorry to tell that we don’t have the skills to translate . If possible, we will add more languages after the beta test.