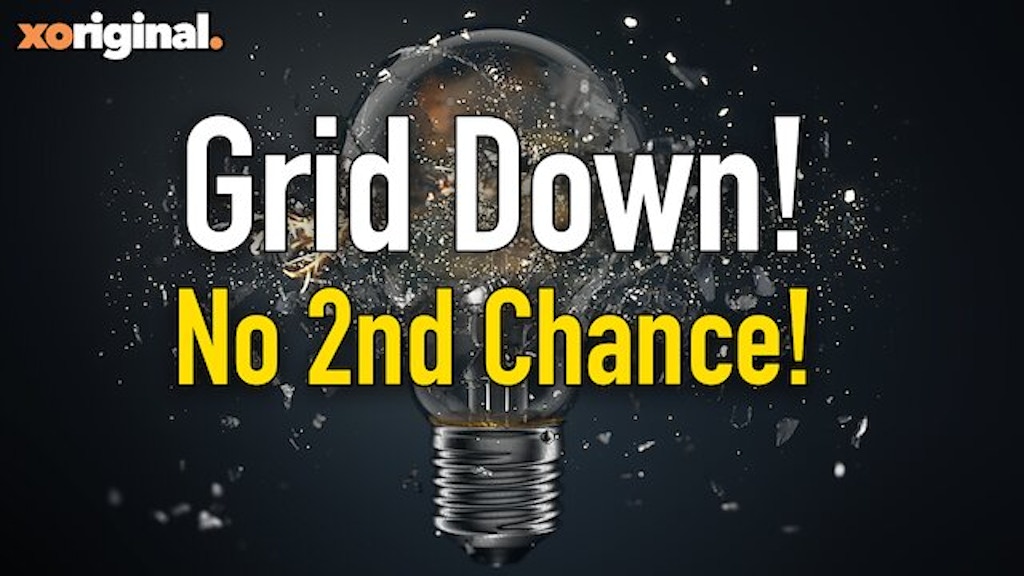 We are in the final stages of finishing a shocking, but hopeful documentary detailing enormous threats to our power grid and the failure at many levels to deal with them.We are seeking funds to more professionally ‘finish’ the film and ‘kickstart’ our marketing outreach.  We truly believe this documentary can ‘go viral’ and you can be a part of it.

We are at grave risk of the US power grid shutting down completely. In this cataclysmic scenario, an electromagnet pulse attack (EMP), cyber-attack, or geomagnetic disturbance (GMD) could shut down our electricity grid for as long as one calendar year or longer. If you thought the recent COVID virus was paralyzing, this dwarfs that incident by 1000-fold. Once again, the country is unprepared in the face of great peril but cost-effective solutions currently exist.  Why didn’t we have enough masks and PPE in February ?   What’s encouraging about this project, however, is that there’s reason for hope to fix this problem.  Current technology exists to ‘harden’ our power grid and new high tech products have made it less expensive. There are regional initiatives been successfully pursued that illustrate how success can be easily achieved with the right organization and effort.  The documentary shows this ‘hope’ as well as providing a legislative letter writing campaign to state and federal legislators and to each constituent’s state utlity commission chairman.

A potential shut-down will render banks, hospitals, water purification plants, phones, and anything that requires electrical power, useless, again for possibly more than a year.  We have received direct and veiled threats in the last year from the top leaders of each of our adversaries: Iran, North Korea, China & Russia.  Note ex-General & former Trump advisor John Kelly on EMP:  https://www.express.co.uk/news/world/873452/North-Korea-World-War-3-Donald-Trump-Kim-Jong-un-US-war-news-electromagnetic-pulse-bomb

Additionally, a GMD is overdue as the risk is significant that a solar storm as big as what occurred in the Carrington Event in 1859 could shut down our power grid for an extended time period. NASA suggests that we face a 12% chance per decade of this occurring.  FEMA outlines that areas that are estimated at a 10% chance per decade are considered as ‘special flood hazard areas’.  https://www.youtube.com/watch?v=V2fCIoS9unE

But there are ways to prevent this event from shutting down our precious electricity, which supports all our critical system enabling daily life.  It will require a groundswell of the American people to rise up and demand that we address & fix this vulnerability. This phenomena was even mentioned in a 2019 Congressional Roundtable.  The American people possess the power to demand new legislation, restructure executive remedies, and become true Patriots fighting on the ground, and we can accomplish this.  We will have action response tools to allow the public to make their voice heard which is discussed below.

As we will show in the film, our grid system is vulnerable to four basic forms of attack –

There is a belief among many that malware now exists within our power grid component software to accomplish such a catastrophe at an enemy’s timing. https://www.youtube.com/watch?v=3is-AzwPoC8  So far, protections have not been put into place because of incompetence, vested interests, poor organization, and obstruction occurring by those who oversee and administer the grid’s workings.  It is a national tragedy, but one that can be rectified.  U.S. Senator Ron Johnson has been quoted in February 2019 that ‘now’s the time for action’ & this film will make it happen.    Our policymakers have been talking about this for more than a decade and still virtually nothing has been done to protect us.  See Newt Gingrich warning the country in 2009. He’s still making the same appeal today, eleven years later as so little has been accomplished.   https://www.youtube.com/watch?v=vurpNu84seU.

To ensure follow-through to accomplish our objective of protecting our power grid, we have an action plan incorporating two initiatives. For all viewers of the film, we’re providing pre-written letters to their appropriate lawmaker (state legislator, utility commissioner & Congressmen/Senators) expressing outrage and demanding them to take specific actions. Additionally, film viewers will be provided a PDF document articulating what measures they can take to help defend their own family should we not protect our power grid in time.

This is an important moment in history. What we do and how we face these threats will determine whether we as a society as we know it will literally survive. This is not hyperbole, I promise.  It has been estimated by the federally funded EMP Commission, which reported to Congress that in a protracted ‘grid-down’ situation, 75%-90% of Americans would not survive. This film documents leading expert opinions, explains in a clear voice what we’re dealing with, how we got in this predicament, and outlines which action steps we can take to ensure we protect this great nation’s future.

With your contribution, we will be able to enhance this film to an even higher level and pay for strategic social media marketing to ensure it makes the greatest impact. Given the gravity of the message in this film, we believe with some kindling, the fire will spread quickly among the people and action will be taken quickly. Some new technology exists that can be implemented to harden substations in only a two-week period so some action can be taken quickly. Tell your network about us by sharing our message with your Facebook and Linked-In friends. Send them to our website at LightsOutDoc.com or GridDowDoc.com. Thank you for your time, contributions, and concern for the future.

A TIME FOR ACTION
“We have known about the existential threat posed by electromagnetic pulses (EMP) and geomagnetic disturbances (GMD) for decades. Because most people are either unaware of the danger or view these as very low probability events, there has not been sufficient public pressure to take effective actionto mitigate these threats. Instead, we establish commissions and study panels, conduct research, and develop plans to develop strategies. It is way past time to stop admiring this problem, and we must actually begin to do something concrete to protect our vulnerable electrical grid, control systems, and the ever-increasing array of electronic devices our society has become dependent upon.”
Senator Ron Johnson, 2/27/19 – Roundtable: Perspectives on Protecting the Power Grid from an EMP or GMD, Senate Homeland Security & Governmental Affairs Committee.